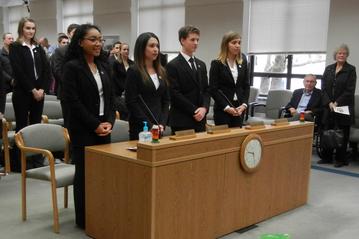 We The People & Project Citizen

Getting scholars to agree on a single, all-inclusive definition of public policy is no easy task.

Broadly, we might say that a public policy is simply what government (any public official who influences or determines public policy, including school officials, city council members, county supervisors, etc.) does or does not do about a problem that comes before them for consideration and possible action.

Specifically, public policy has a number of key attributes:

Policy is made in response to some sort of issue or problem that requires attention. Policy is what the government chooses to do (actual) or not do (implied) about a particular issue or problem.

Policy might take the form of law, or regulation, or the set of all the laws and regulations that govern a particular issue or problem.

Policy is oriented toward a goal or desired state, such as the solution of a problem.

Policy is ultimately made by governments, even if the ideas come from outside government or through the interaction of government and the public.

Policymaking is part of an ongoing process that does not always have a clear beginning or end, since decisions about who will benefit from policies and who will bear any burden resulting from the policy are continually reassessed, revisited and revised.

No doubt, there are many problems in our communities that need to be solved. Some problems may readily be dealt with by actions taken in the private sphere (individuals and families) or by our civil society (social, economic, or political associations or organizations).

Public policy problems are those that must be addressed by laws and regulations adopted by government. Your first task in ProCitizen is to firmly establish that the problem you want to work on is, in fact, one which requires government involvement to reach a solution.